New here and so on the OC thing. After reading your super detailed OC guide here on the forums, i tried to do some twerks about it. Results? CPU frequency didn't change, at all. 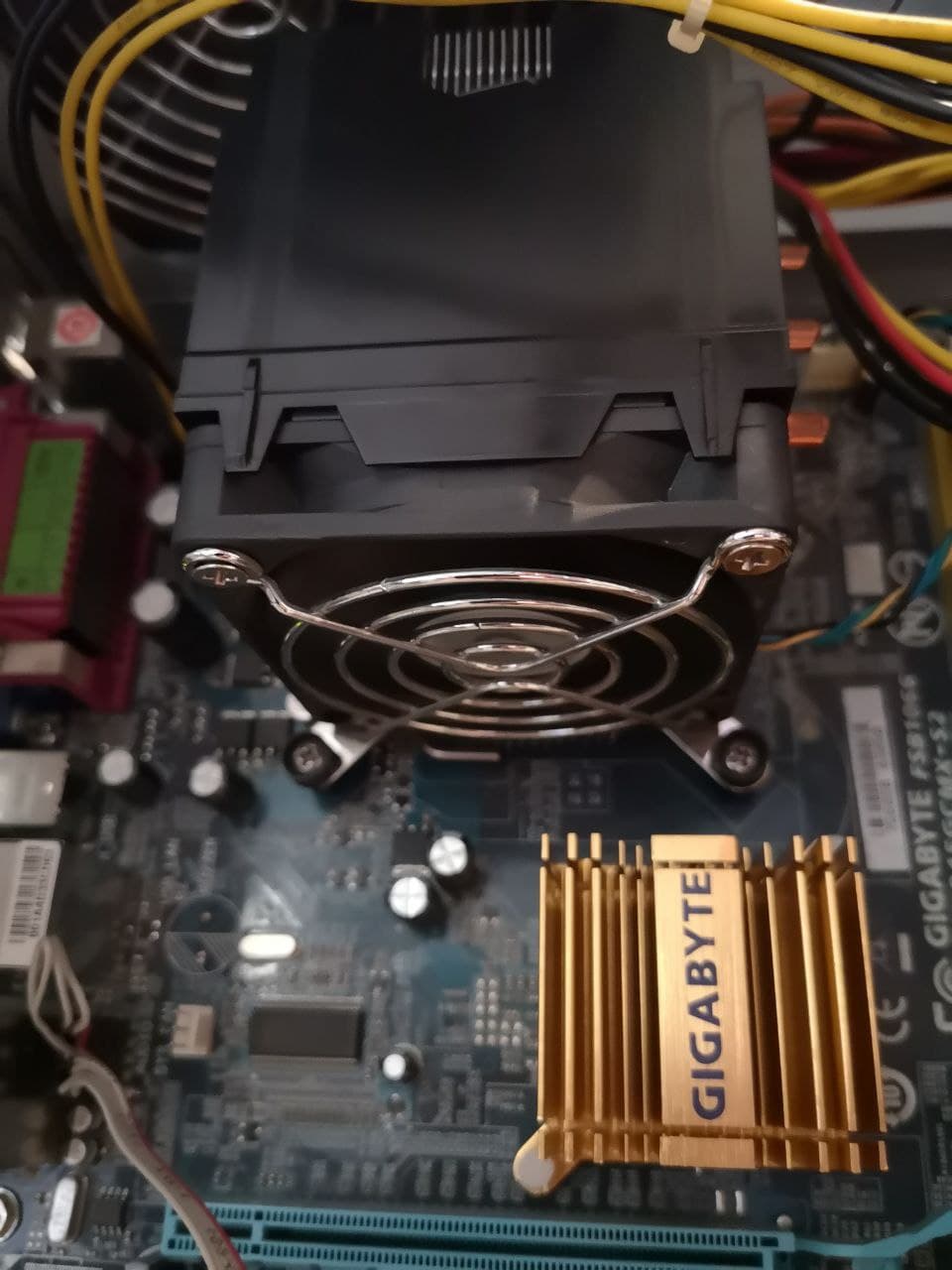 Yes, i know it's not the best cooler out there, but i don't have any plans to change it by other more powerful because i don't want an extra-overclocked system. I would like to see how many Ghz i can increase the CPU with the characteristics set (without changing the motherboard or the heatsink).

OK, so this is the scenario, but there are a few things that i don't get. First, the CPU frequency. It's supposed to run at 3.33Ghz as the official Intel website says, but it only goes at 2.67 Ghz. Why?

Rebooted, i entered the bios and this was the set config: 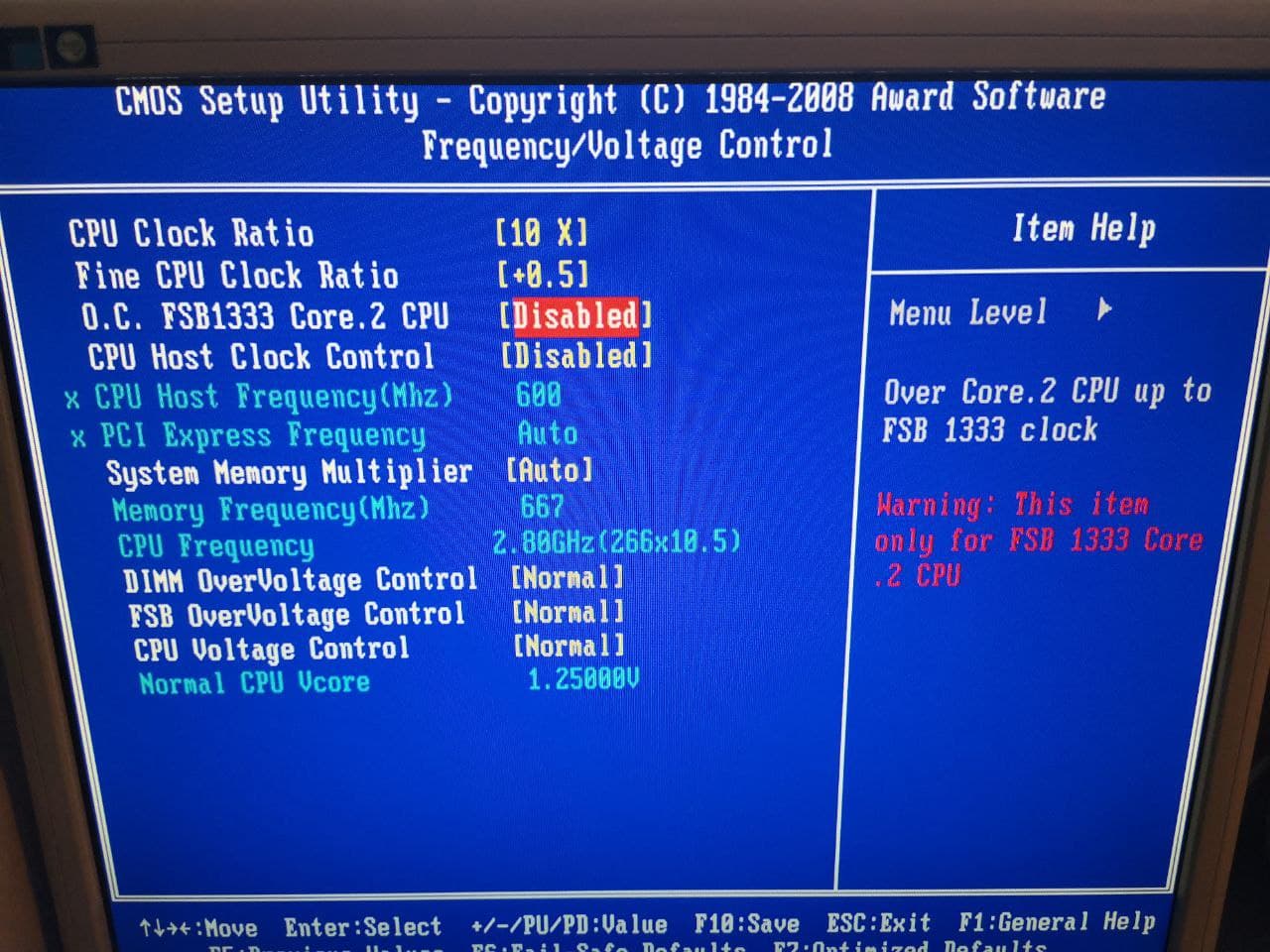 Turned off some recommended things here and there: 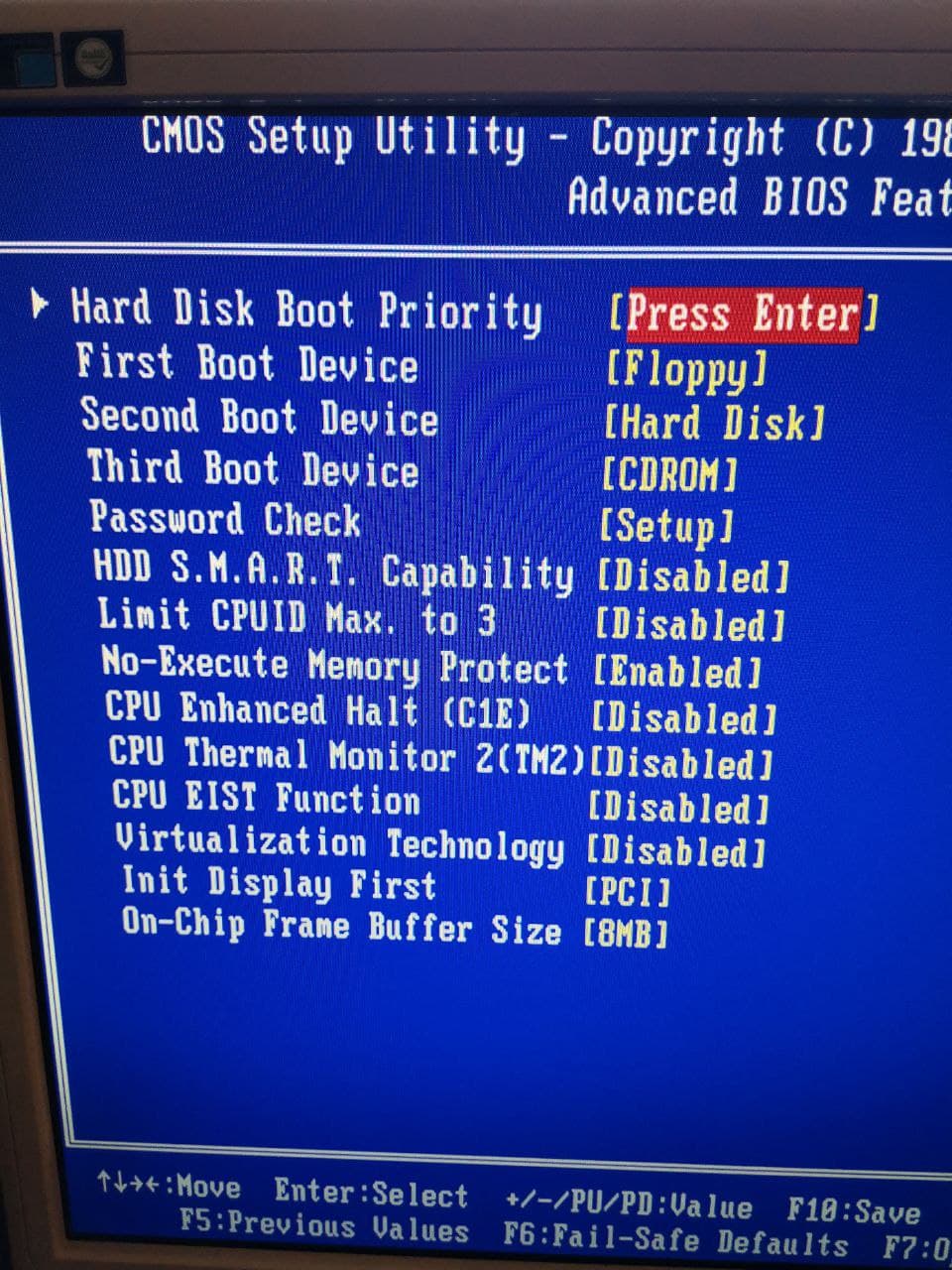 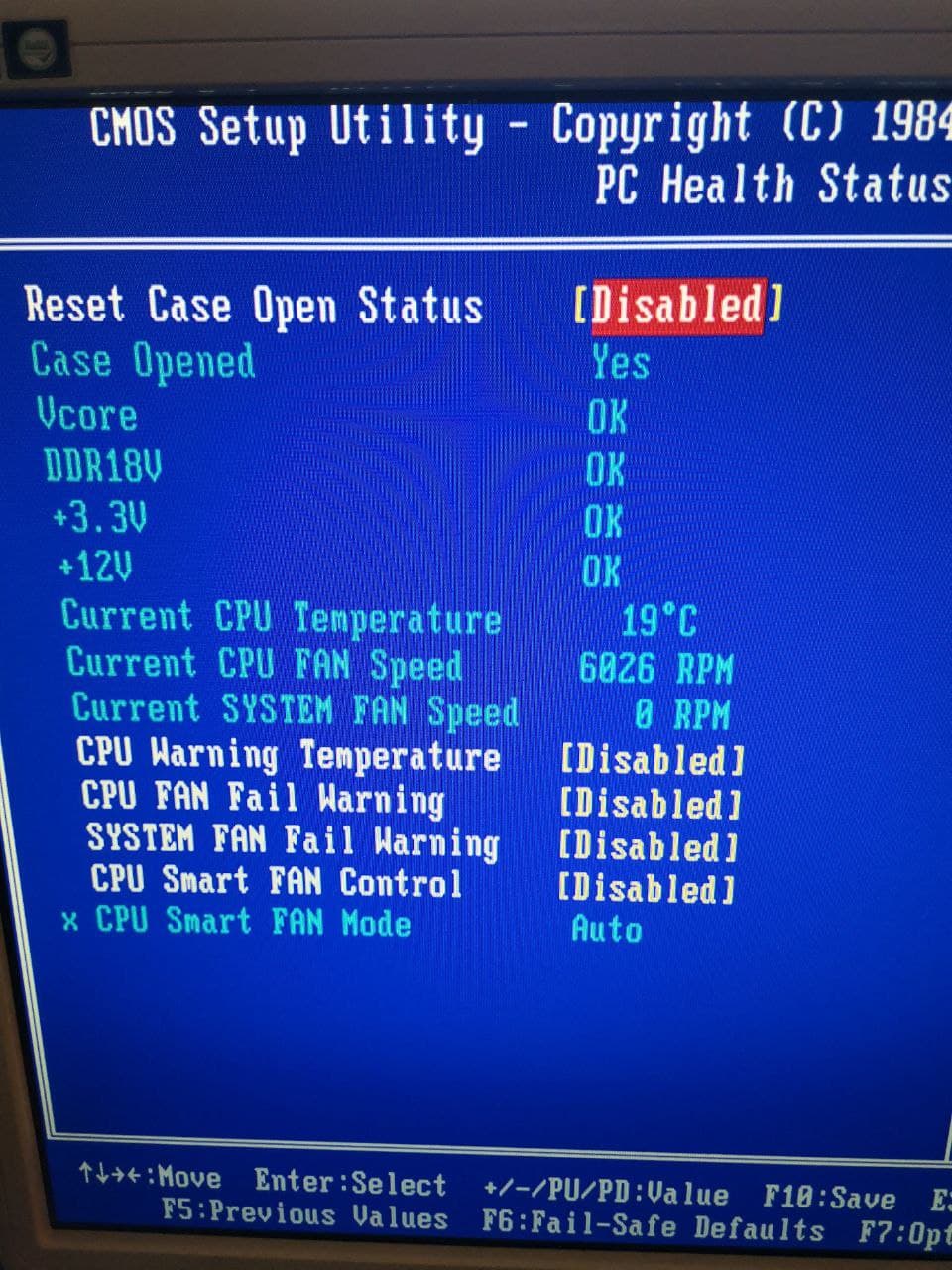 Then, changed to "Enabled" the third option, as my CPU has the FSB 1333Mhz option. Rebooted, not only nothing happened, but also that option automatically changed back to "Unabled". Assuming I had to raise the voltage, I changed the values: 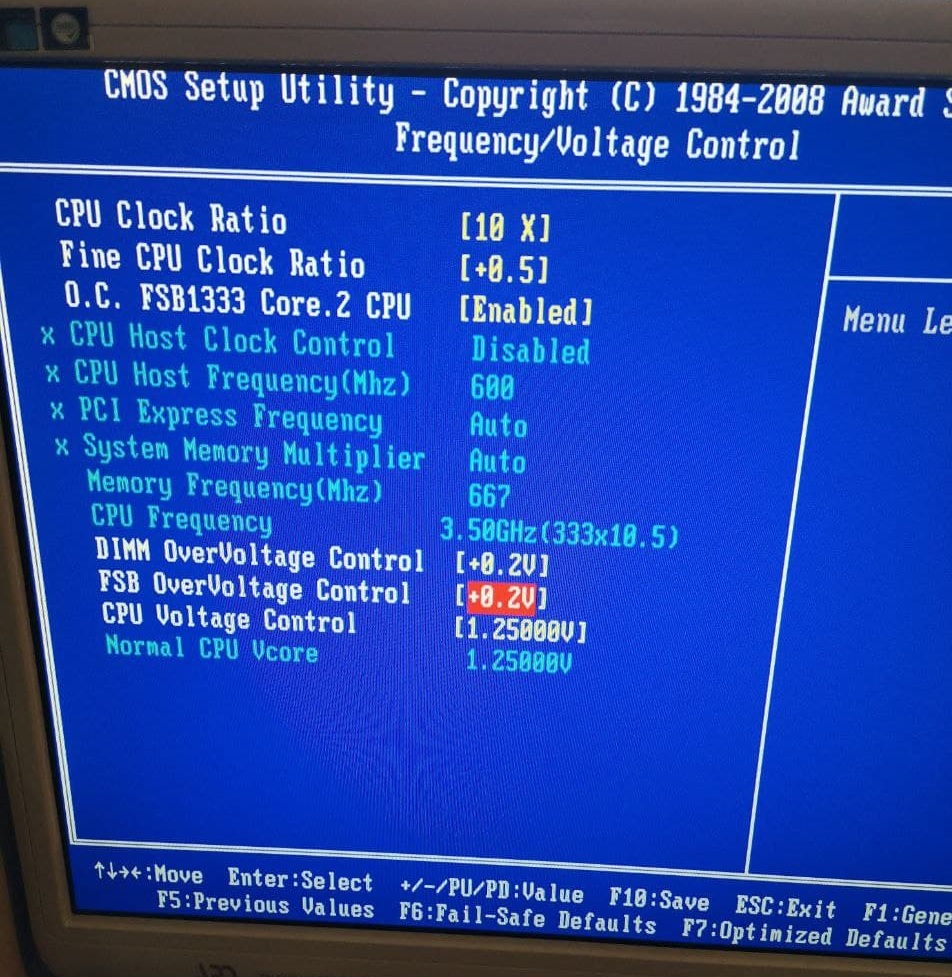 Started Windows, opened CPU-Z again. Nothing changed. HWMonitor voltages obviously changed as well as the fans RPMs (the sound is annoying) and so the temperatures, 34ºC.
Again and a bit frustrated, rebooted the PC, entered the bios and changed some voltages: 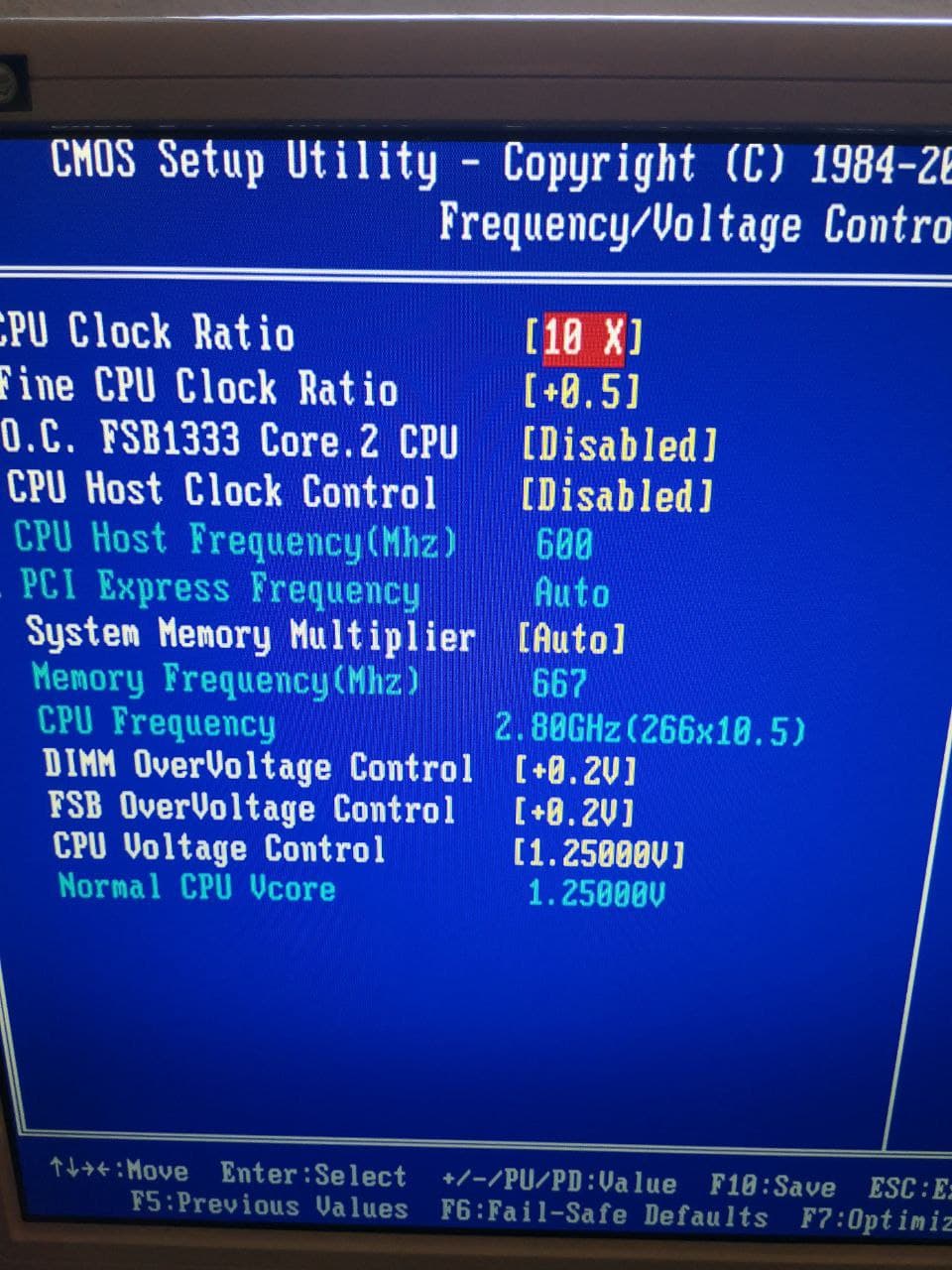 Sorry if I haven't been understood correctly. English is not my native language.
Thank you for reading my blog.

Staff member
To be honest, I wouldn't even worry about overclocking. Even if you could, it's really not gonna make a difference since its only a dual core cpu and only 4gb of ram. Your best bet would be to save up some money and buy a used/refurbished decent windows 10 system with an SSD, quad core cpu and at least 8gb of ram.

Thanks for replying so fast!

Well, i was thinking the same, but you know, at least i tried it. If OC is not the option here, what can you say about all the other questions? For example, why does the CPU state a 3.33Ghz frequency, but then it's only 2.67Ghz?

Staff member
What other options are available for the cpu clock ratio setting? Does it go higher then 10? What does windows system properties show the cpu speed as? Another possibility is that Intel speedstep is reducing the speed until its needed. Try this, open cpuz again and then just start moving the mouse sporadically and you should see the speed increase. I just checked mine and at idle, core speed is at 800mhz but when I move the mouse it increases to above 4ghz and I have an 8700K at 3.7ghz cpu. However, I see that your EIST setting is disabled which is the speedstep. Also see if there is a C1E setting in bios and disable it.

johnb35 said:
What other options are available for the cpu clock ratio setting? Does it go higher then 10?
Click to expand...


johnb35 said:
What does windows system properties show the cpu speed as?
Click to expand...

Is this what you wanted?

johnb35 said:
you should see the speed increase
Click to expand... 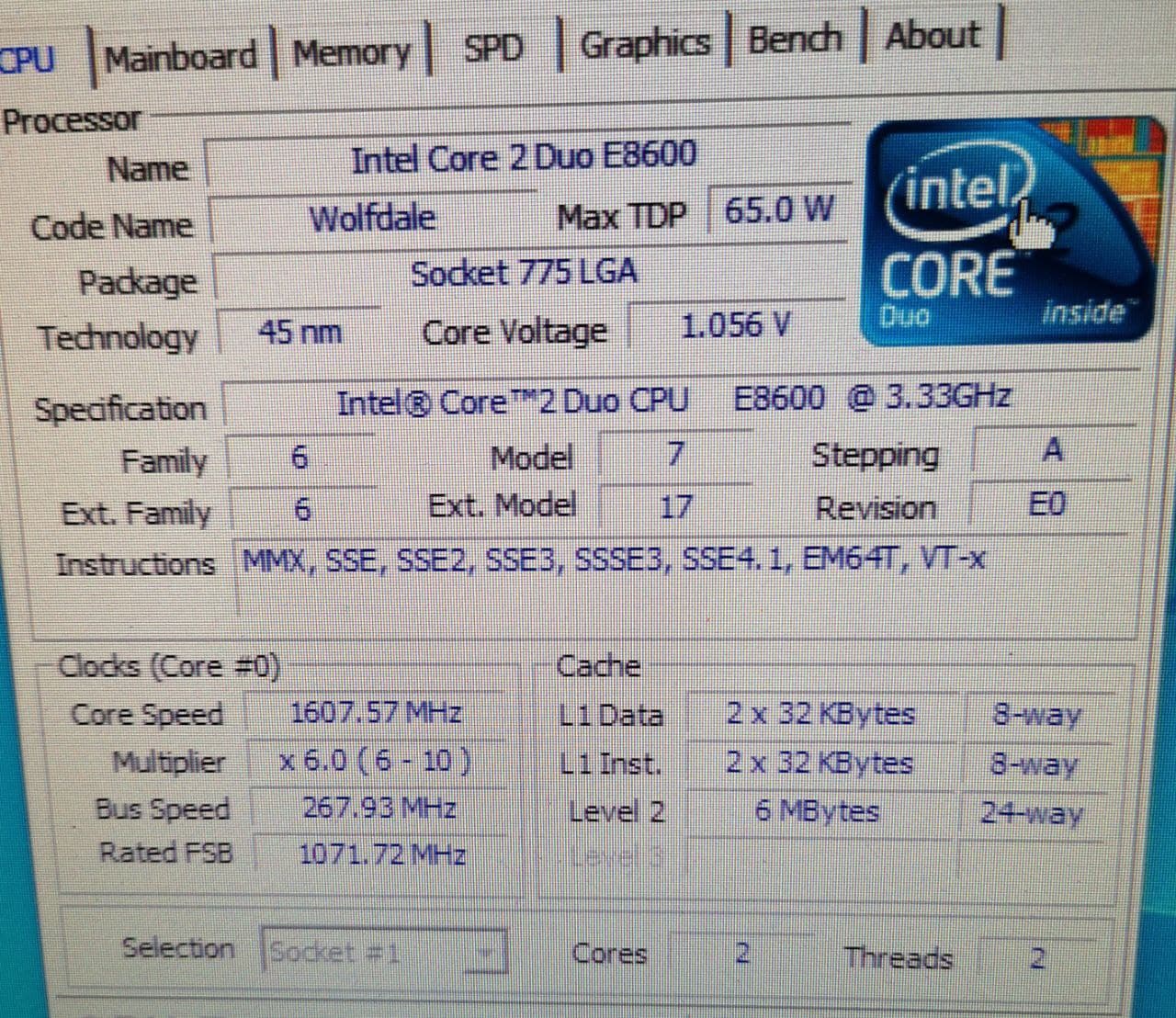 Then, i downloaded some things while getting installed others (moving vigorously the mouse too). Core Speed ranged from this 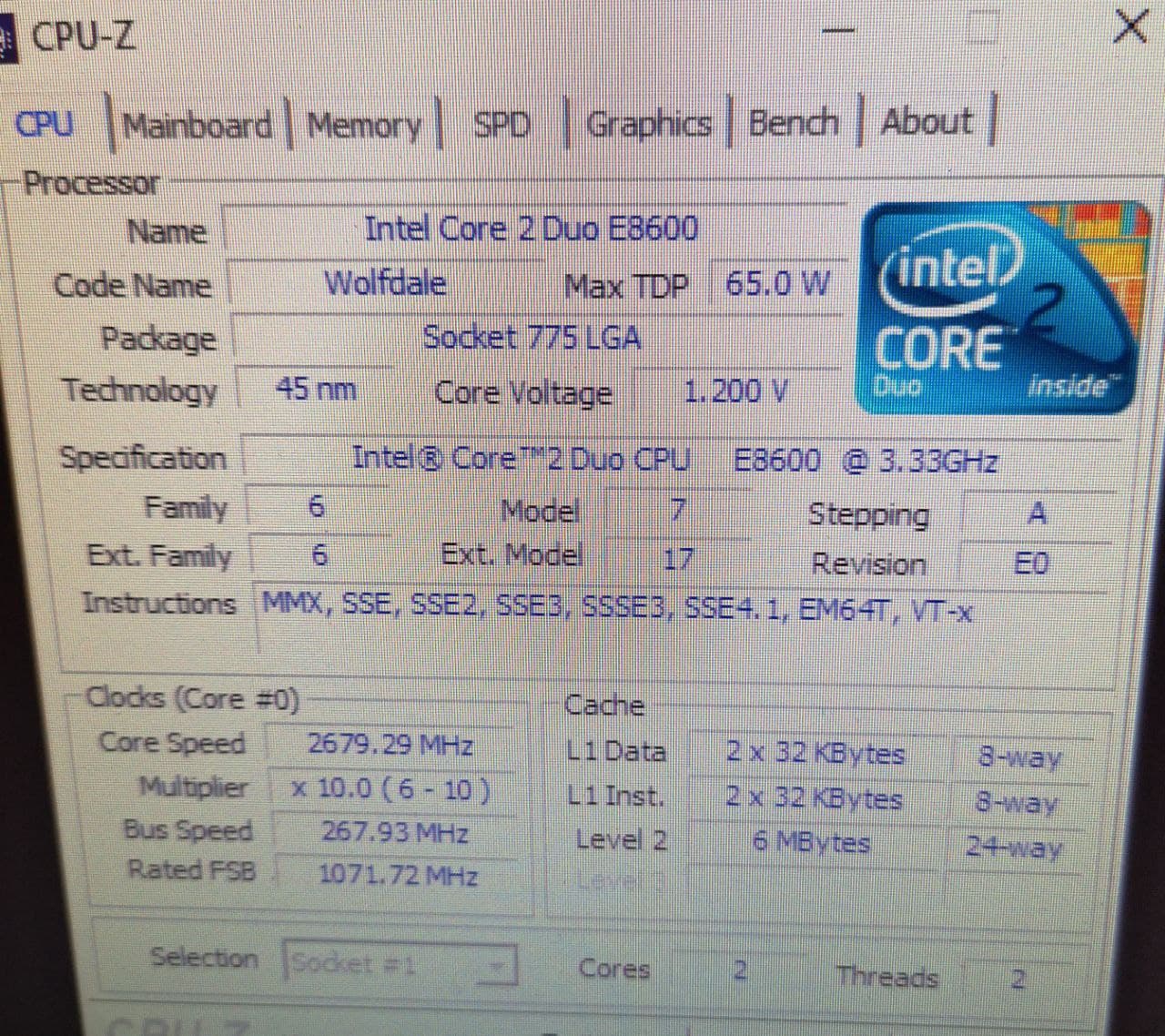 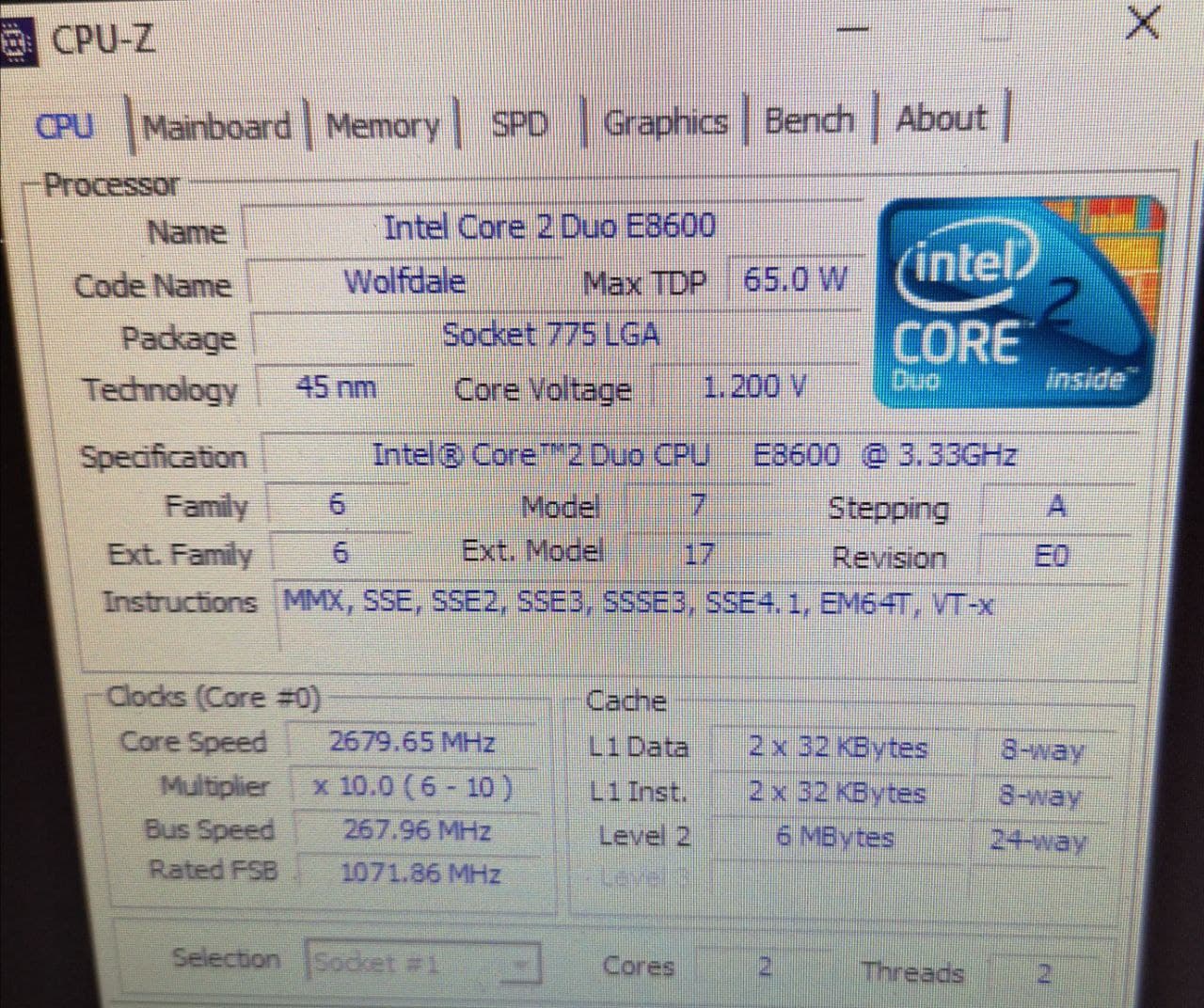 johnb35 said:
see if there is a C1E setting in bios and disable it.
Click to expand...

Staff member
Weird, that should have a 12.5x multi which would give you (12.5x*266) ~3.3 GHz. I'm surprised there's not an 'Auto' setting for the multi which would usually put it on max. You might be able to keep the same multi and lower the RAM ratio while raising the FSB ratio. 10x333 would give you the stock intended clock speed but you'd have to keep an eye on pcie freq (should always be 100 mhz) and the memory divider. Since you're using 800 RAM you should be able to push it up a little bit as the screenshot is indicating 667 and not 800.

I've tried some new configurations changing values here and there, based on what @beers said. Unfortunately, the only parameter that still reminds with no change after rebooting the PC is the "PCI Express Frequency" value (set at ASYC, so always is at 100Mhz): 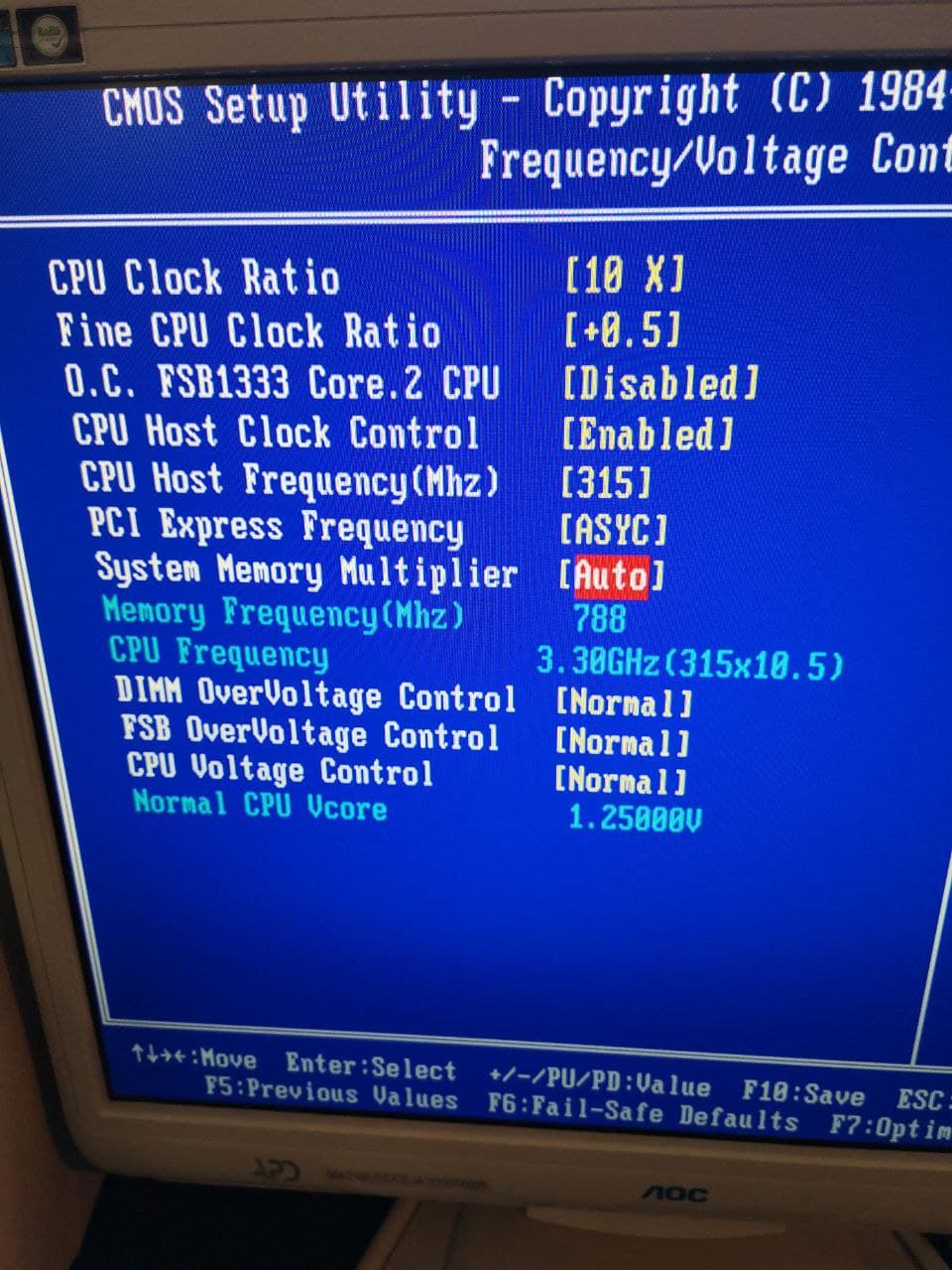 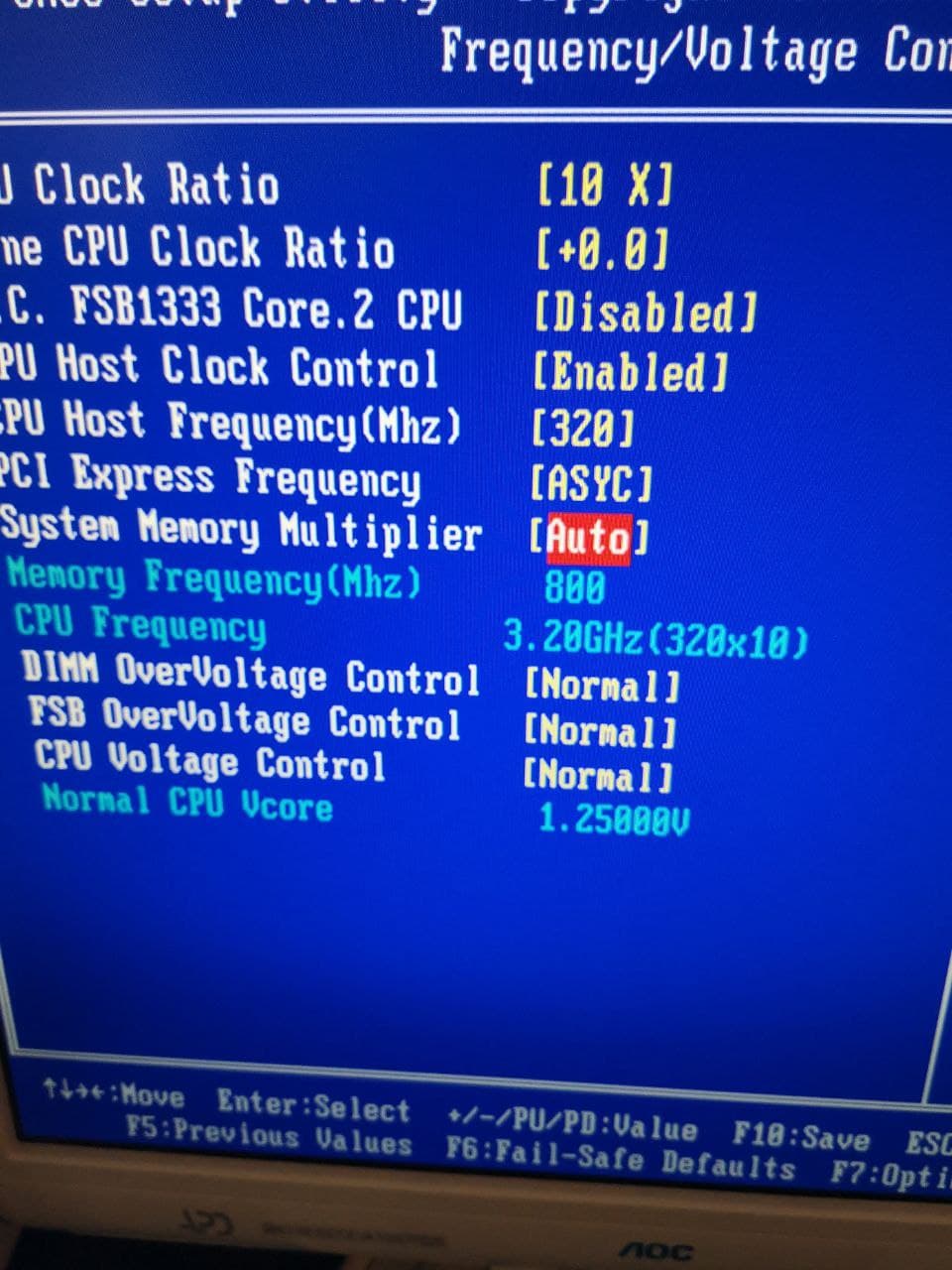 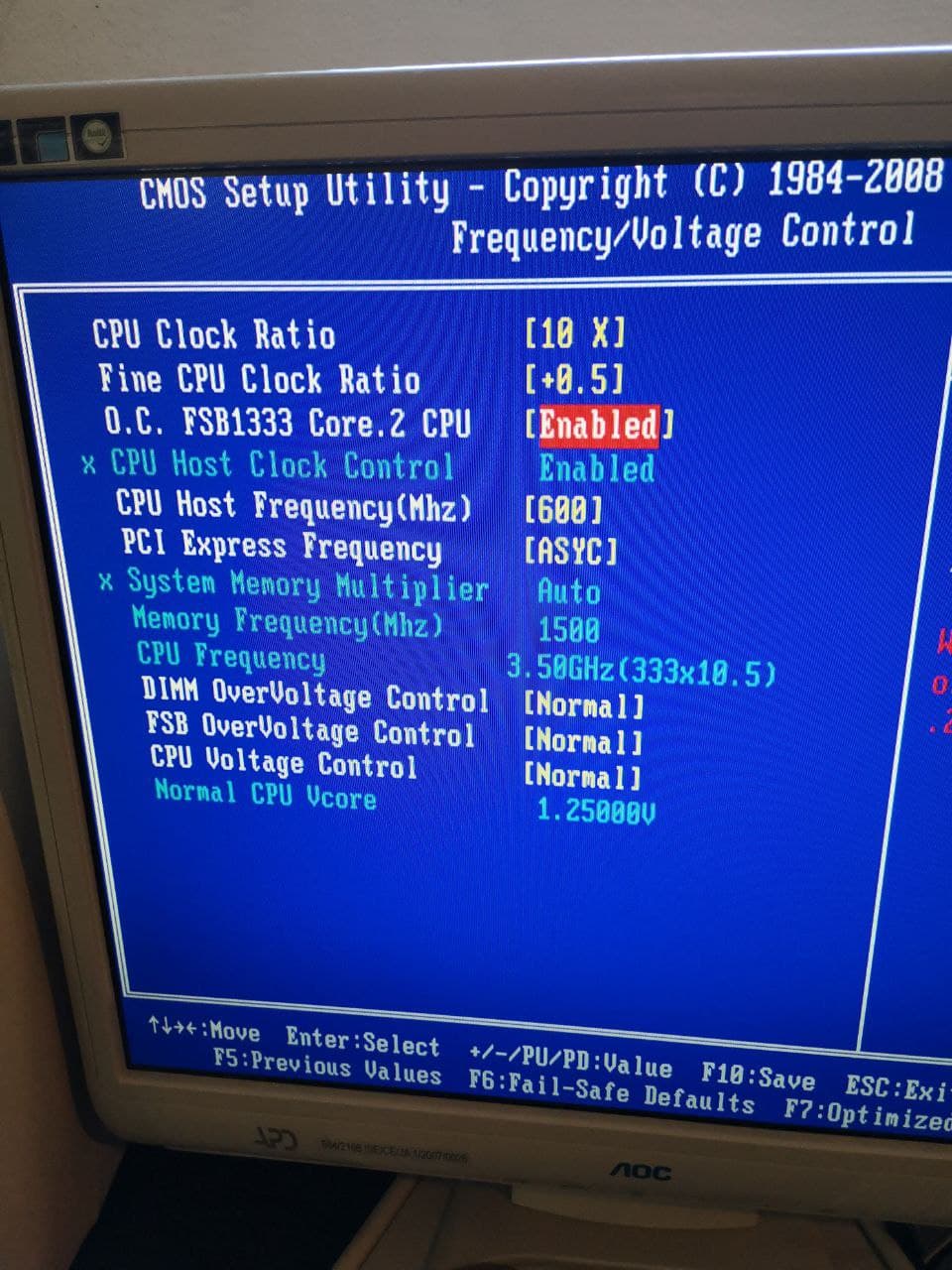 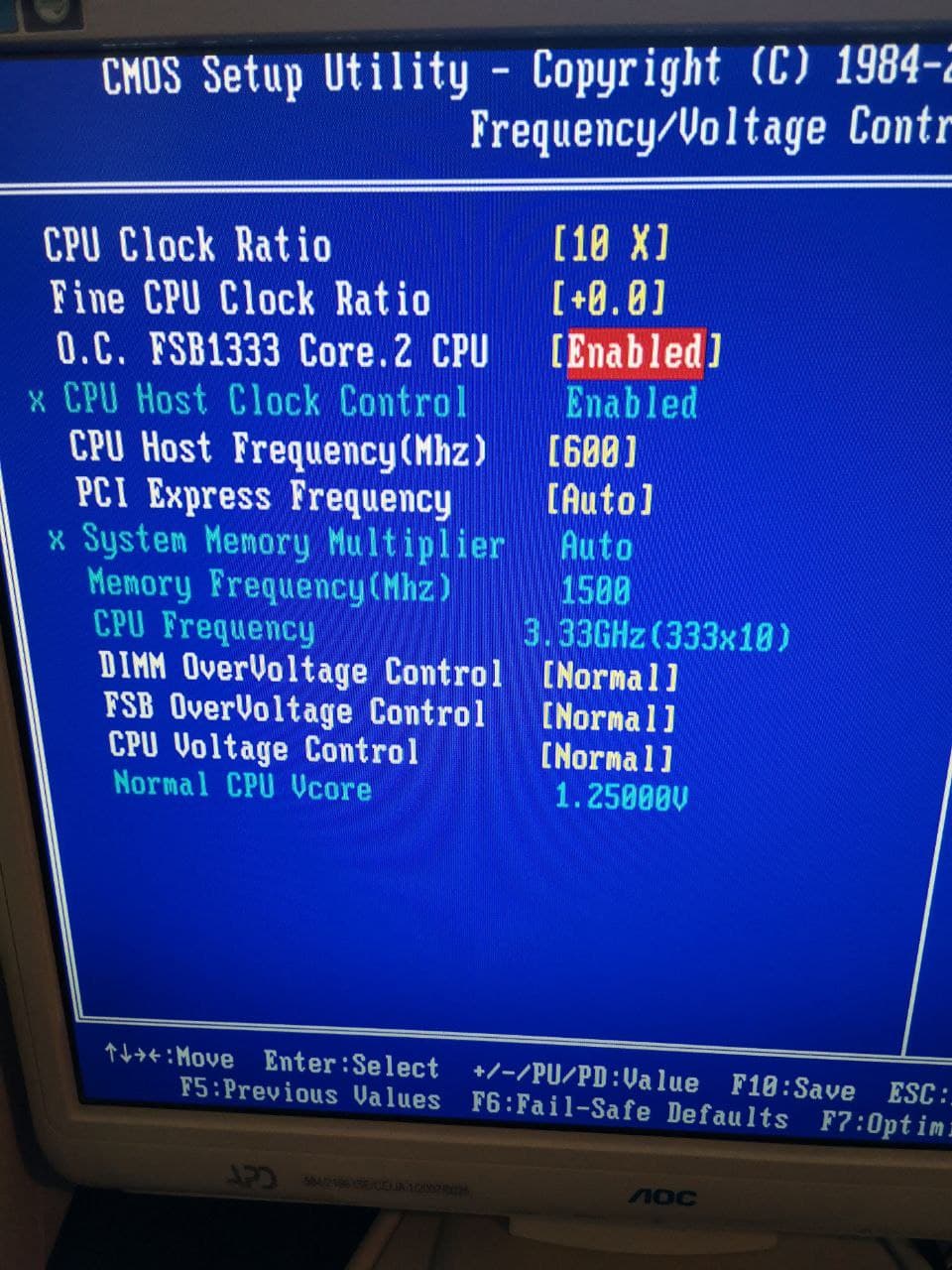 Even with the base CPU frequency of 3.33Ghz, nothing changed. The system frequency only raised to 2.68Ghz instead of the previous 2.67Ghz value. Well, it's something at least. idk, maybe it's not a CPU problem but motherboard.

For what i've researched, the NorthBridge Chipset (945GC) wasn't the best with the OC feature...

Any ideas or may i lose any hope on this?

If you mostly just want your CPU to run at 3.33GHz as advertised, here's what I would set:
CPU Clock Ratio: 10
Fine CPU Clock Ratio: +0 (dont use 0.5)
OC FSB1333: Disabled
CPU Host Clock Control: Enabled
CPU Host Frequency: 333
PCI Express Frequency: Auto
System Memory Multiplier: Whatever options keeps your RAM close to their rated speeds, shown right below
Keep voltage high-ish at the beginning. 1.28 is more than safe and should be enough to rule out low voltage when testing.