Staff member
From what I understand, Excavator will be the last module setup except for the X86/ARM combo and low end APUs. From what I see since Jim Keller is back at AMD. He is working on a new high performance X86 CPU architecture. Doing a single core design with high IPC, with up to 8 cores and 16 threads for servers and desktops. Instead of the module design they will be full single cores using something similar to Intels HT. From what I hear, sometime in late 2015.

Staff member
I can't understand why they would still want to make single core cpu's. Single cores are crap once you play with any dual core and above. 2ghz Dual core should be minimum these days.

Staff member
No I mean no more modules with 2 cores. They will be full single cores with up to 8 cores using something like HT instead. Heard Jim Keller thinks the module has to many flaws to fix and starting from scratch.

Staff member
Does this mean they might actually catch Intel? Probably wishful thinking.

Staff member
To me the FX are a good deal for the price and all being unlocked. Have no interest in a APU, unless its a really low end build. Hard to beat them if your using onboard video. But the FX is a good CPU considering price and being unlocked. But like said, they do suck at single threaded. Hope the IPC gets fixed.

I hope they fix the IPC. I want to find a reason to go back to AMD. Just haven't seen the performance in the areas where I need it. I hope they can pull it off.

Staff member
I have never been a fan of AMD CPUs and would likely never consider buying one for a build of mine with their current offerings, but it would be good to see them 'back in the game' with something that can really rival the i7 4770K and maybe even the likes of the 4930K - especially if it's cheaper than the i7s.
D

I was a huge AMD fan boy back in the 939 era aka the best one period. Now it's pretty much Intel or nothing. They perform so well and are work horses.

I would love to see AMD back in the game of performance as this will push both companies to get to higher levels. As well this will also drop the prices a little too as they will want to be competitive with each other.

DaveSi677 said:
As well this will also drop the prices a little too as they will want to be competitive with each other.
Click to expand...

Exactly. My worry was that if AMD pulled out of the 'enthusiast market' then the cost of Intel CPUs would soar because there would be no competition. At least if AMD remain in the market and remain competitive then that won't happen.
Last edited: Jun 3, 2014

To give you some information of the improvements the steamroller cores offer over piledriver: 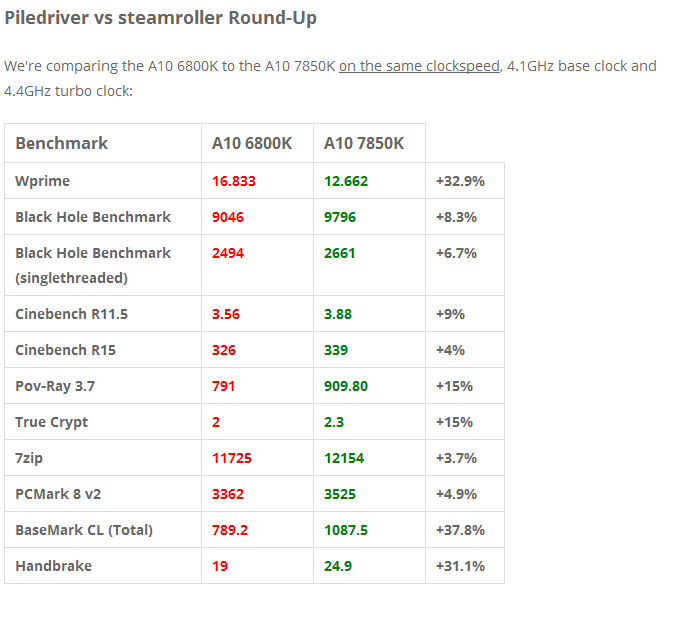 An FX8xxx with steamroller cores could have had some succes in my eyes. Anyway, I'm glad they're leaving the CMT architectures. Professionals already saw this as an infeasable idea even before they launched Bulldozer. I think they're pushing the limits on this kind of architecture (especially at the current 28nm process).

If you look at their mobile/tablet/low power APUs, they're doing great against intel's offerings. They also have lower clocks than the intel counterparts and achieve the same singlethreaded scores. AMD has difficulties finding partners though...

Staff member
My 8320 is a great processor for how cheap it is and it tears through 95% of my games just fine. I'm just speaking more in terms of the really high end market. Mid to low end, Intel and AMD are both viable, especially for gaming purposes.

I'm starting to think that ARM CPUs are going to catch up to Intel before AMD x86 CPUs do. Of course, AMD may be trying to use that to their advantage: http://www.anandtech.com/show/7724/...arm-based-server-soc-64bit8core-opteron-a1100

spynoodle said:
I'm starting to think that ARM CPUs are going to catch up to Intel before AMD x86 CPUs do. Of course, AMD may be trying to use that to their advantage: http://www.anandtech.com/show/7724/...arm-based-server-soc-64bit8core-opteron-a1100
Click to expand...

This is something quite exciting and maybe a little worrying for Intel.

There hasn't really been a competitor to x86 architecture when it comes to servers and PC's so to see an ARM processor, potentially as powerful but using less power and producing less heat, give it a few generations to mature and there could be a big change about... Assuming a decent desktop OS that supports ARM shows itself in that time

Staff member
WOW almost a 7year old thread. Seems I hit a home run on that one.

StrangleHold said:
WOW almost a 7year old thread. Seems I hit a home run on that one.
Click to expand...

Sorry sir, I'm going to have to ban you for necro-bumping a thread